Watch design is nice. Time keeps nicely. Only lost 15s in a week. Thou what stops me from using it daily is the second hand doesn't align correctly. Mine could be a defective unit. Else a good purchase. 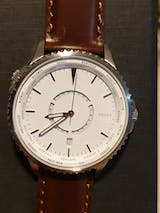 P
Pierre
Worth the wait?

Received 14 days after order (international delivery), the box it car in was simple but efficient, the watch it self looks as good as I expected. The set up take a while to grasp as the hour dial changes as well. So I would say it’s rather positive.

I do have three setbacks to point out, first is the oyster bezel, it feels a bit out of place on this watch (an attempt to look more expensive?). Second, the « world » dial, it is fun to play with, but the dedicated crown feels too loose. I’ve just tried the watch a few minutes that it had moved halfway to another city… And last the wristband, the leather marks extremely quickly, you will notice as soon as you put it on the first time. It’s not a deal breaker for me, I know leather will evolve and adapt to its wearer and to outside factors, but be aware that it won’t keep as neat as on the product description.
And reading past reviews, I can also say that the second hand doesn’t align perfectly to the markings

I've had this watch for a while and always get compliments on it. Along with the ability to change the straps, it can give you a watch to match any occasion.

T
Thibault GASPARD
Worth the Wait

After one year of being sold out this model and Navy Blue color came back on sale. It looks great and works perfectly. definitely what I expected. :)